This DOE BETO-funded research project examined the environmental effects of short-rotation loblolly pine (Pinus taeda) production for bioenergy in the southeastern US using a watershed-scale experiment in a before-after, control-impact design. Environmental measurements included water and soil quality, hydrology, tree productivity, and stand-level ecophysiology. Most of these environmental metrics were measured before (for ~2 years) and after (for ~6 years) harvest, planting, and managing short-rotation loblolly pine for bioenergy on more than 50% of two treatment watersheds. These measurements were also collected in one mature timber reference watershed. The three study watersheds were located in the Upper Fourmile Creek watershed at the Savannah River Site in the Coastal Plain of South Carolina, USA. All silviculture practices in the two treatment watersheds followed South Carolina’s Best Management Practices (BMPs) for forestry. 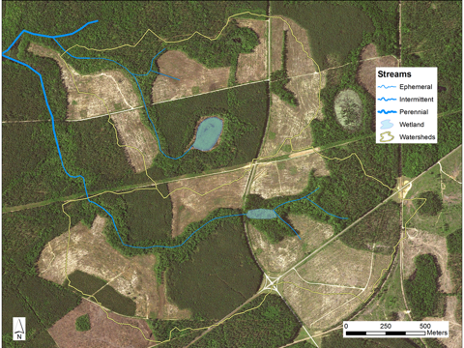 Aerial image of the two treatment watersheds and the harvested areas where loblolly pine seedlings were planted. Satellite image from the National Agricultural Imagery Program, US Department of Agriculture. Image from Griffiths et al. 2019. 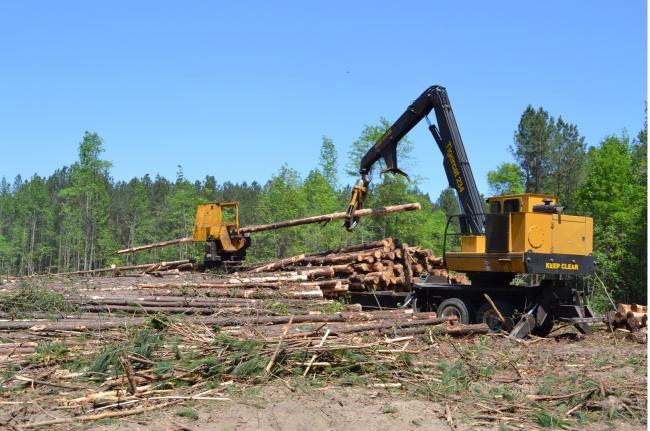 Harvest of the extant forest prior to the planting of loblolly pine seedlings in one of the treatment watersheds. 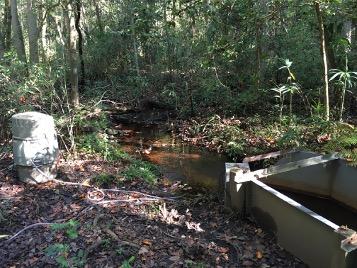 Measurement location for stream water quality and stream flow in one of the study watersheds.

The silvicultural plan (multiple herbicide and fertilizer treatments) was designed to achieve high yields of loblolly pine over a short rotation (10–12 green tons/acre/year at 10–12 years), and tree growth and net ecosystem exchange measurements confirmed that accelerated growth was achieved. However, only 30–60% of the nitrogen applied in fertilizers was sequestered in pine after the fourth growing season. These results, combined with a plot-scale study that manipulated levels of applied herbicide and fertilizer, suggested that some components of the silvicultural treatments were efficient (i.e., early control of competing plants) and some aspects were not (i.e., early fertilization). 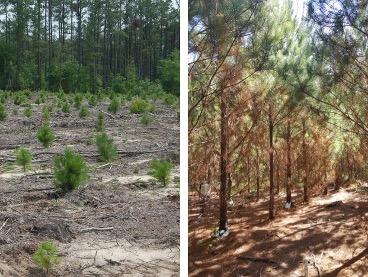 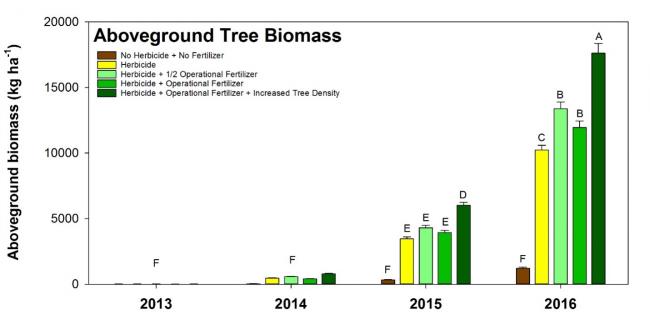 Despite the high fertilizer applications in the watershed-scale experiment, there were minimal effects of short-rotation loblolly pine production on stream water quality, suggesting that forestry BMPs appeared to be effective at protecting surface waters. However, nitrate concentrations increased in groundwater following harvest and the first fertilizer application; maximum concentrations were generally <2 mg N/L. These low-gradient watersheds are dominated by groundwater flow paths, and groundwater and conservative tracer modeling suggested that some of the elevated nitrate in groundwater should have reached the streams during the 6-year-long post-treatment monitoring period. It is likely that some of the elevated nitrate was removed via denitrification as measurements suggested that this microbial process was important in removing nitrate in groundwater both in the sandy upland areas and in the organic-rich riparian zones in the study watersheds.

In summary, the minimal effect of short-rotation loblolly pine production for bioenergy on stream water quality suggested that current forestry BMPs were effective at protecting surface waters in the Coastal Plain landscape even with high levels of fertilization and herbicide application. These results should be applicable throughout the southeastern Coastal Plain, in watersheds that are characterized by low-gradient uplands with sandy soils and organic-rich riparian zones.

This dataset reports the pre- and post-treatment water quality and hydrology data from a watershed-scale experiment that evaluated the effects of growing short-rotation loblolly pine for bioenergy on water quality and quantity in the southeastern U.S. (Griffiths et al. 2019). The experiment took place on the Savannah River Site, near New Ellenton, South Carolina, USA. Beginning in 2010, water quality and hydrology were measured for two years in 3 watersheds (R, B, C). At the end of February 2012, 50% of two treatment watersheds (B, C) were harvested and loblolly pine seedlings were planted and managed for bioenergy (including multiple applications of herbicides and fertilizers) (Ferreira et al. 2020). Water samples were collected from stream water (weekly), riparian groundwater (monthly), groundwater beneath the uplands (monthly), throughfall (weekly), and trenches that collected shallow subsurface flow (during storms), and these data are available for the pre- and post-treatment periods. Water samples were also collected from three concentrated flow tracks that formed in watersheds B and C in the post-treatment period. Sample collection ended on or before September 30, 2018 (throughfall sample collection ended on September 27, 2017). Water samples were analyzed for nitrate-N, ammonium-N, total dissolved N, soluble reactive phosphorus (SRP), total dissolved P, and dissolved organic carbon (DOC) concentrations, and water temperature and specific conductivity were measured in the field. Stream water samples only were analyzed for turbidity, and total suspended solid (beginning in 2013), total nitrogen, and total phosphorus concentrations. Select samples (usually collected seasonally) were analyzed for pesticide concentrations (until May 2016). Water samples were also analyzed for stable isotopes of nitrate (δ15N, δ18O), and data are available for the pre-treatment period. Stream flow and trench flow were measured every 10-15 minutes, and these data are available for the pre- and post-treatment periods. Stream flow data are summarized as daily mean discharge.

Acknowledgements: This research was supported by the U.S. Department of Energy, Office of Energy Efficiency and Renewable Energy, Bioenergy Technologies Office. Oak Ridge National Laboratory is managed by UT-Battelle, LLC, for the US Department of Energy under contract DE-AC05-00OR22725.

This study took place in 3 watersheds in the National Environmental Research Park on the Department of Energy’s Savannah River Site (SRS), near New Ellenton, South Carolina, USA. The study watersheds are located in the Upper Atlantic Coastal Plain, a region characterized by a humid subtropical climate. Additional information on the climate, geology, and ecology of the SRS can be found in Kilgo and Blake (2005).

The pre-treatment period was designated as January 1, 2010 through February 27, 2012, and the post-treatment period was designated from February 28, 2012 to September 30, 2018. Water samples were collected from streams, riparian groundwater, groundwater beneath the uplands, interflow, concentrated flow tracks, and throughfall. The latitude and longitude of each sampling location is reported in a datafile. Samples were not collected when the sites were dry (e.g., stream water sampling stopped because of a regional drought, no samples collected from throughfall samplers when there was no or little throughfall in a given week, riparian groundwater wells did not have enough water to collect samples, etc.).

Shallow subsurface flow (i.e., interflow) was sampled from 5 trenches (1 per watershed in the established pine forest, and 1 each in watersheds B and C installed at the edge of the loblolly pine plantations and the riparian zone) that were constructed on contour within a hillslope. Multiple drains collected interflow from each trench face, and the drains emptied into v-notch weir boxes located downslope. A more detailed description of the trenches can be found in Du et al. (2016) and Jackson et al. (2016). Throughfall was collected in a funnel (200 cm2) that was connected to a 3.8 L amber polypropylene bottle. Throughfall collectors were located under the canopy (3 throughfall collectors in watershed B, 3 in watershed C, 4 in watershed R). Sampling occurred weekly (when there was sufficient volume for water chemistry analysis), and water in all throughfall collectors in a given watershed was composited before collecting a sample. Pollen and other debris was sometimes present in the sample, resulting in high nutrient concentrations. Because the presence of debris was not always noted, all data are included in this dataset. Sampling of concentrated flow tracks (CFTs) occurred weekly until the CFT dried up.

Water samples were brought back to the laboratory on ice, and filtered (0.7 µm) into clean polyethylene bottles (for nutrient and pesticide analyses) or amber glass vials (for DOC analysis). Stream water samples collected for total nitrogen, total phosphorus, and total suspended solid (TSS) analyses were not filtered. Samples for all nutrient analyses were frozen at -20 °C until analysis, and samples for TSS, DOC, and pesticides were refrigerated at 4°C until analysis.

Stream flow was measured every 15-minutes at a two-foot H-flume installed at the outlet of each watershed. Water level was measured using a pressure transducer and automated water sampler (ISCO 6712, Teledyne ISCO, Lincoln, NE), and stream discharge was calculated based on the known configuration of the H-flume. Data were reported as mean daily discharge (L/s).